Combo Offer 35% Off + 10% Extra OFF on WhatsApp
[email protected] +61 2 7908 3995
Economic Ideas and Models for Business Assignment Sample
Get Upto 50% off
Securing Higher Grades Costing Your Pocket? Book Your Assignment At The Lowest Price Now!
X

Marketing equilibrium is a condition where demand and supply equal light for a specific point in the graph. Market equilibrium represents the point where the demand curve and supply curve cut each other and it also represents the equations of demand demanded products is equal to the supplied product in the market for the company.

Price Elasticity of demand reflects the flexibility of movement concerning movement in the price of the products in the market. As we have mentioned earlier that when the price increases, the quantity demanded of it reduces for any product. But, to what extent it will fall, depends on various factors such as customer's buying power, income, willingness to spend money, price sensitivity, and others.

Effects on the supply or demand curve, equilibrium price, and quantity in the following cases are as follows:

As the vaporizers price increases, the cost of suppliers will increase. At the increased cost, the margin of profit will remain less. To maximize profits, the supply of quantity will be less in the market till the cost of production reduces or the price of cigarettes increases to cover the increased cost from the sale of cigarettes. Hence, the supply curve will move in a downward direction.

If the cost of production increases, the price for the product will also need to increase to cover the increased cost and to maintain profit margin. Hence, the buyers will be less willing to purchase at high prices. But, the higher price will only affect those whose buying power is low due to its inelastic demand.

If there is a decrease in supply then equilibrium price will automatically increase if other factors are constant in the market. As the decrement of supply increases, the absence of products in the market can be the major cause of the hike in demand of the product in the market as well as the price for the products. 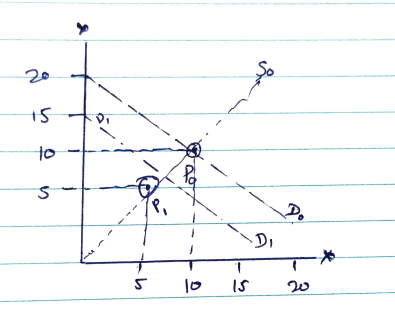 An increase in wages leads to an increase in the cost of production. To recover the cost, the supplier may want to hire fewer employees which thereby reduces the quantity supplied. So, the supply curve will move in the downward direction.

An increase in wage rates will increase buying power and so the consumption. So, the demand curve will move in the upward direction.

An increase in demand and a decrease in supply will cause a rise in equilibrium price but the effect on equilibrium quantity cannot be determined in this case as it depends on the relative size of the changes. 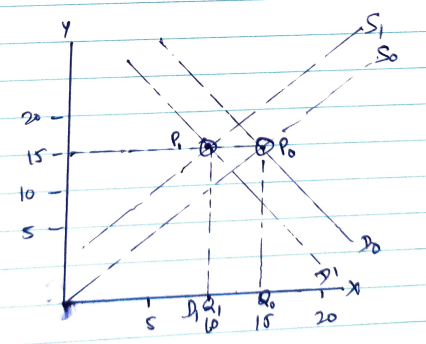 Cigarettes are a demerit good and consumption of this can cause cancer. Research on the disadvantages and health impacts of cigarettes can help the aware general public. This will reduce the demand for cigarettes.

As the equilibrium price decreases, suppliers will hold the supply till the price rises again. Hence, the supply of cigarettes decreases. Hence, the Supply curve will shift in the downward direction. 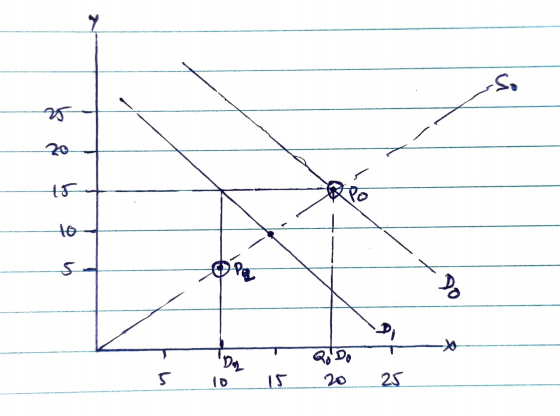 A high intake of cigarettes can cause cancer. It is hazardous to health and it impacts our society badly. It is the largest cause of preventable death. The government needs to take steps to reduce the consumption of cigarettes. Government can do so by taking various steps such as:

In the current scenario, governments are used more taxation on tobacco and cigarette to overcome the uses of cigarettes in the country. With new taxation policies, the government increased the cost of tobacco and cigarette which can be the most effective strategy to reduce smoking and also increase the health awareness program to overcome the demand for cigarettes in the market. There is an average 10% increase to in the price of the product in for the market but there is no decline in the demand of the product as around mostly adult populations are demanded cigarettes but this will be reduced in near future as the government has double up the taxation for cigarette and tobacco products.

Fund collected by taxes can be utilized for tobacco prevention programs, services, and materials aimed at public health and wellbeing improvement (Beck & Lein, 2020).

Smoking is a major reason for diseases such as lung cancer and heart disease, which take lives of the millions of people every year. Also, cigarette generates a high proportion of the economic cost including spending on medical and hospital expenses to treat the diseases caused by the cigarette as well as lost productivity and income due to illness and deaths (Alkali et al., 2018). The general public is also exposed to smoke because of those who smoke in public areas, stations, buses, trains. This leads to discomfort in breathing in old age people, infants, and pregnant women. The government should also make stricter laws regarding the use of cigarettes and their decomposition. High taxes on cigarettes will reduce its demand. This is not only beneficial to the government but also to the general public as everyone has the right to live in a safe environment.

Higher price impacts more to backward class people and therefore quantity demanded reduce more in the weaker class of people. This ultimately helps to reduce socioeconomic inequalities in health. The public is generally supportive of taxes on hazardous products, particularly if the proceeds are to be used for healthcare purposes or improvement of the overall welfare of the society.

The rich class of people is less price-sensitive so their consumption will remain the same as before irrespective of the increase in prices. In this way, the government can collect more taxes from the rich class of the population. This will help to reduce income inequalities. Richer class of people pays higher taxes on their income but they pay very less proportion of their income on indirect taxes i.e. taxes levied on the purchase of goods (Zhang et. Al., 2017). Hence, charging more taxes on luxurious products and hazardous products will generate more tax revenue to the government from the rich class of people and it will reduce income inequality of the country.

The ultimate motive behind a hike in taxation for cig cigarette rates is to improve the health of citizens and also decreased the demand for a cigarette in the market. There are various myths spread by the tobacco industry which affects adversely the positive impact of the price control and taxation policy formed by the government for a cigarette and other tobacco products. The tobacco industry uses incorrect arguments (Ding et. Al., 2018). Hence, it is time to break those myths and to throw light on the actual impact of cigarette taxation.

The actual scenario is Tax revenue increases because a fall in consumption is less than proportionate to the rise in price. Therefore, It helps in increasing government revenue.

The actual scenario is weaker class is more price sensitive. They will quit or reduce their intake of cigarettes. It will improve their health and reduce their spending on illness.

The actual scenario is various other factors helps to encourage illicit trade such as weak government policies, weak custom duties provisions, weak excise department control, corruption, and unions of cigarette manufacturers. Hence, it is very much important to introduce cigarette taxation together with strict tax administration to reduce tax evasion by manufacturers.